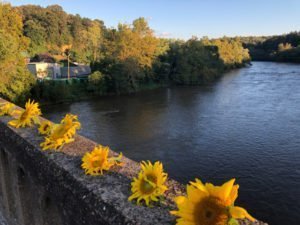 ASHEVILLE — Hundreds of sunflowers greeted drivers Wednesday on a bridge over the French Broad River.

They brightened both sides of the Craggy Bridge near Woodfin, yellow blooms popping through the humid early-morning mist. In the afternoon, when the late-summer mercury rose, they remained, though they had begun to wilt in the heat.

William “Tama” Dickerson, one of the partners who manages the nearby Olivette community, said the flowers had been plucked from the organic farm that serves as the 346-acre neighborhood’s central amenity.

He and Allison Smith, Olivette partner and director of sales and marketing, said this was the second time they, and other community members, had festooned the bridge.

“The last time we did it was to celebrate the reopening of the Craggy Bridge (after repair work),” she said. But she and Dickerson were considering turning it into an annual event.

“It’s so popular, and it brings people so much joy,” she said. “The act of doing something for the sheer fun of it brings a lot of deep satisfaction on so many levels.”

With an entire field of the flowers, Smith said sharing seemed like the nice thing to do.